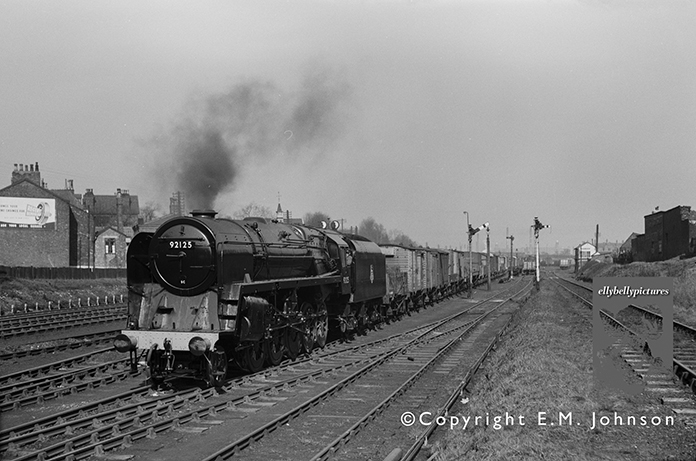 Brand New BR Standard 9F 92125 is seen on a running-in turn somewhere in the Stockport area on possibly 21st March 1957. Can you help with the location and date?

Brand new BR Standard 9F is captured in glorious sunshine by railwayman Ronnie Gee on a ‘running-in’ turn back to Crewe Works. Believed to have been taken on 21st March 1957, the train is seen somewhere near Stockport, but we are not exactly sure of the location. One possible location is thought to be Guide Bridge as the same train is seen on another photograph taken later in the day at Heaton Norris Junction. Can anybody help identify the location exactly?

The locomotive was delivered to Wellingborough Shed (15A) on 31st March 1957, but it was amongst many of BR’s later builds to have its working life cut short in the mad dash for modernisation; being condemned at Carlisle Kingmoor shed in December 1967 and scrapped in April 1968. Ronnie captured another new-build 9F on test at Longsight Shed (92080 in April 1956), and another new member of the class (92131 in April 1957) at Crewe Works still in it’s primer.

Given Ronnie’s position as a railway signalman, he was not only able to photograph trains from a prime vantage point but always seemed to be in the right place at the right time. No doubt his access to Special Notices was supplemented by information supplied by fellow railwaymen who got to know him over the many years he took photographs.

If you would like to be kept up-to-date with news about forthcoming books or new photographs then please subscribe to the Blog using the box on the right-hand side of the page.

If you can help to identify the location of this photograph then please use the box below:

One Reply to “Running-in turn to Crewe”