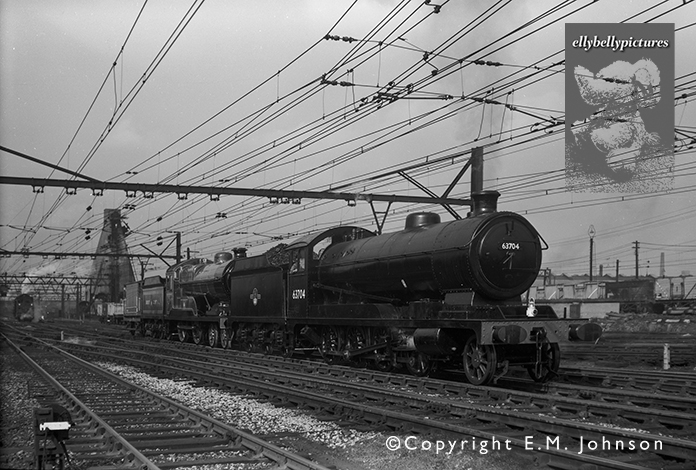 Butler Henderson and 63704 at Gorton works

This photo is another to feature in the upcoming book celebrating the photographs of railwayman Ronnie Gee. After the successful identification of the location of brand new 92125 in our last post, we are after some more help with this photograph.

The photograph (along with several others) shows an externally restored Great Central D11 No.506 ‘Butler Henderson’ being shunted from Gorton works along with ex-works Robinson O4 63704 as 24th July 1963. ‘Butler Henderson’ was moved to Romiley for a ‘photoshoot’ before being moved to the Clapham Transport Museum (the forerunner to the National Railway Museum at York). The ex-LNER engines have been moved from the works yard by the loco in the background. Judging by the lamp arrangement on 63704 it seems that O4 will take 506 to Romiley; but did it then take it forward for onward movement to London?

According to Yeadon (via brdatabase.info), 64704 was at Gorton for Heavy Intermediate repair in August/September 1961 and a Light Casual repair in March 1962; neither of which are July 1963! Given also the fact that Gorton Works closed in March 1963 I am beginning to wonder when this shot was actually taken!

I dont have access to a 1963 (or possibly 1961/1962) set of Railway Observer magazines so I am really looking for any information that can shed light on this movement. I can find nothing about the move of Butler Henderson to Clapham, so I have to go with the date being either late September 1961 or March 1962.

If you can help in any way I would appreciate it, either via Social Media or through the Comment box below. Yet again Ronnie Gee had used his railway network and knowledge to be in the right place at the right time to record this moment!