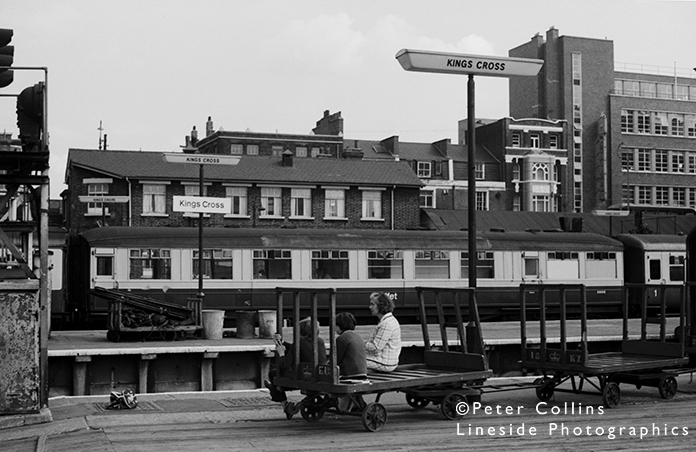 A smartly attired mother has accompanied two boys to King’s Cross for a bit of train spotting and they are suitably ensconced on handy Post Office trollies whilst their airline bag, a common spotter’s carry-all, sits on the platform. In the background one of the last two Gresley-designed Buffet Cars is at rest, marshalled into a Mark 2 set having arrived in the formation of an up express. The scene is vastly different now since electrification.

Peter Collins has captured everything I remember as a train spotter in the 1970s with his photograph taken at King’s Cross. My first encounters up close with Deltics was at King’s Cross when my Dad took me from our home in Buckinghamshire to pick up Grandma from a Newcastle train. Apparently I would cab the locos with my Dad (aged 3; that’s me, not my Dad!), and he would be my chaperone as the spotting bug kicked in in the mid-1970s until I was deemed old enough to go myself. The Post Office trollies, the bag for butties, drinks, the Ian Allan books and the notebooks are all to familiar a scene for many.

By the time I visited King’s Cross, electrification had swept away the infrastructure from steam days, but Deltics still drew the crowds to the platform ends. The last time I was there, over ten years ago, there were no spotters and it seemed very difficult to get onto the platforms.

The Gresley Buffet car E9131E (built in 1937) is looking a bit worn, and would last only a couple more years in BR service. I’m not sure the year, but I suspect that the photo was taken in the early 1970s, pre-TOPS, so if anybody can shed light on the possible working that would be great.

Fortunately the coach is still with us, having been restored to it’s former glory by the Severn Valley Railway as part of it’s Teak Carriage set.

One Reply to “Mum, can we go to King’s Cross please…?”