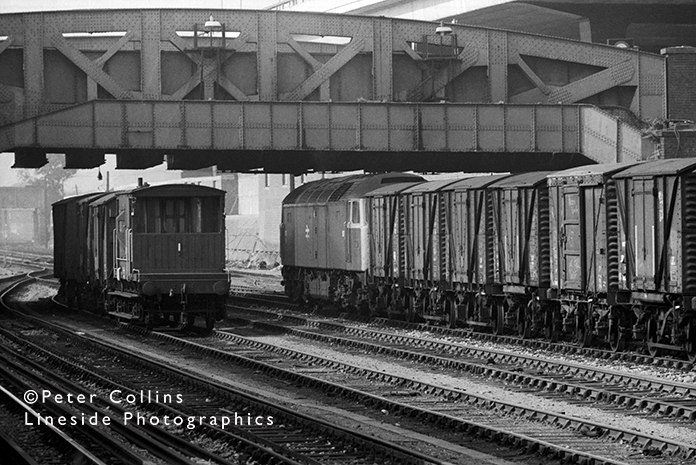 Difficult to believe that well into the rail-blue era, the huge Paddington Goods Depot was still despatching trains to the west. Here, in the early-1970s, a Class 47 Brush Type 4 (D1637 later 47 483) makes up its train of fitted vans in the yard adjacent to Royal Oak underground station on the Hammersmith branch. The location was part of a bus depot, but is now very much an important part of the CrossRail Project.

London Freight in the 1970s

I cannot recall the London Paddington Goods complex  on the north side of Royal Oak Underground station, and even more so given that trains were still being handled there in the early-mid 1970s. In steam days a tank engine would have been shunting the vans, but I assume that D1637 would be taking the train forward to its destination, so Old Oak Common had left it to the Class 47 to shunt the train.

I do remember the odd freight train running through Kensington Olympia, Stratford and Clapham Junction in my early spotting days. Railfreight and Speedlink were still operated by British Rail then, but these days I think freight is normally restricted to Stone trains running to various depots in London, plus the many container trains running between the Great Eastern and West Coast Main Lines.

Peter Collins took some fabulous shots of freight trains in and around London, and they will be appearing in a forthcoming collection soon at Lineside Photographics.

The gradual fall away of freight on British Rail as the road transport lobby found favour with the Thatcher Government, seems to have been a decision that accelerated Privatisation. It effectively put the nail in the coffin of the railways transporting goods other than containers or bulk loads of coal and aggregates.

I dont suppose that the Railfreight or Speedlink concept would work today due to the necessity of building freight handling facilities to replace those that now were swept away and replaced with factory units or housing….