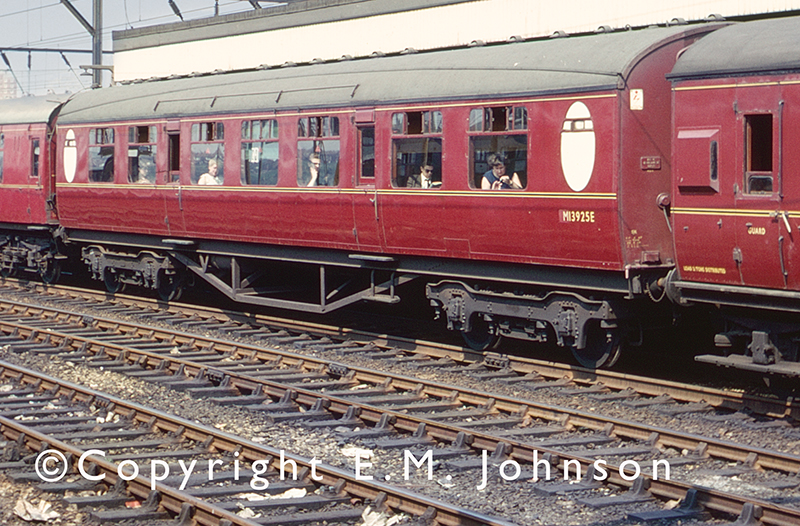 Thompson Vestibule coach M13925E (ex E13925E) is seen in an LM Region train at Stockport Station in the late 1960s. The photograph was taken by ex-railwayman Ronnie Gee.

Why is a Thompson coach running on the LM Region

I’m currently compiling a book using some fantastic colour and black and white images taken by ex-railwayman Ronnie Gee, who finished his career as Stockport Station Manager. One such image is the picture shown above, which shows Thompson ex-Third Class vestibule M13925E (ex E13925E) included in the stock of the 15.05 Manchester Piccadilly to Plymouth service on the 16th June 1967. The coach was built at York to Diagram 329 in 1950, and had previously been in use on Anglo-Scottish services on the East Coast Main Line.

I would be very grateful if anybody can help shed light on some details of the transfer of the carriage to the LM Region. I’ve looked through some books I have, as well as the internet but have yet to find any further details. As the carriage sets tended to be marshalled from the same depot I assume that the coach was based at Longsight Carriage Sheds, but if you know better please let me know!

I like photographs like this as you often capture little cameos of life; this picture is no different as the lady in the first compartment is obvious to the world outside as she concentrates on varnishing her nails!

Further details of the book will be made available soon, but the collection of colour photos are some of the best I’ve seen, and being a railwayman Ronnie seemed to be frequently in the right place at the right time to capture movements of trains that today hold some historic significance (like that of the coach above).

If you can help, please use the comments box below to get in touch.