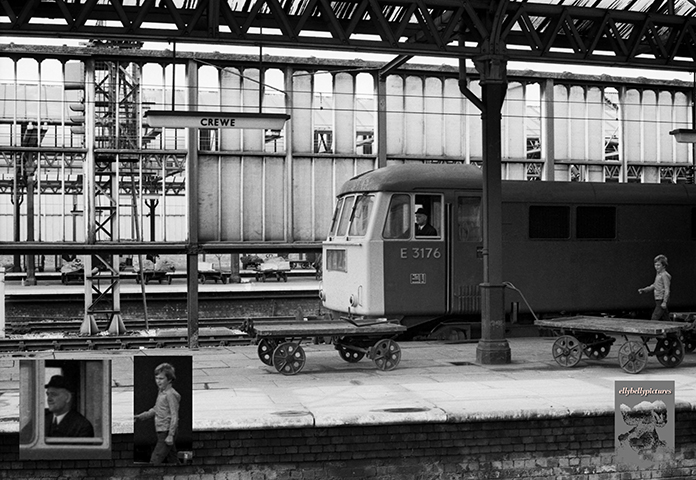 An interesting mixture of the modern railway of the 1970s with traditional adjuncts as AL6 Class 86 number E3176 awaits the 1A28 departure southbound from Crewe with a West Coast express whilst all around are period trollies and the flagstones of years past. Note how much parcels traffic was still being conveyed by rail.

An evocative photograph by Peter Collins taken at Crewe in the early 1970s. Class 86 Electric E3167 (later 86007, 86407 and now currently operational as 86607) awaits departure amongst the trollies with working 1A28, a southbound express to London; but can anybody tell me the actual service?

I’m a little rusty when it comes to West Coast electrification and without a Working Timetable I don’t know if this is an Anglo-Scottish service or one from Liverpool or Manchester.

In addition to the service I’ve also slightly enlarged both the driver and the trainspotter, so if you can identify either of them I would also appreciate it. I believe the photo to have been taken in 1971-1973, but cannot give a more precise date than that. The spotter has a pen and piece of paper in hand, and is maybe looking use one of the empty trollies as a seat for the next few minutes.

Many things have changed since the photograph was taken; the complete lack of trollies at stations these days, the removal of flagstones on platforms and of course the lack of any parcels traffic on stations. The only surprise is that the locomotive is still operational with Freightliner running as 86607. What I wouldn’t give now for such a scene at Crewe or any station these days. The bland trains stand at a bland station, and more often than not the spotters are over 50!

Please use the form below to contact us if you know the service, or can identify the driver or spotter.