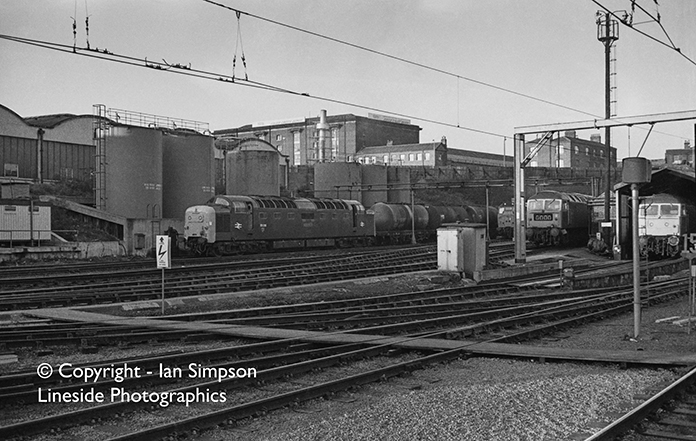 Deltic 55018 ‘Ballymoss’ awaits its next duty from King’s Cross in the late-1970s. The King’s Cross Fuelling Point was always the first place to look when spotting!

An evening view of King’s Cross Fuelling and Stabling point sees Deltic 55018 ‘Ballymoss’ awaiting its next duty north from London. It is standing in front of the TTA wagons used to deliver fuel to the depot which was stored in the tanks seen behind the Deltic.

This is the first of a series of photos showing locos moving on and off the facility. The Class 31 sitting behind the Class 47 still sporting a 4-digit head-code panel is 31249. The Class 47 sitting in the fuelling shed is Gateshead stalwart 47409 (one of the original ETH locomotives). The date is post rationalisation and electrification, so at the earliest is 1976/77; but I have no date for the photograph.

I’m hoping that anybody who worked at King’s Cross could possibly remember the scaffolding around the chimney stack at the factory behind the fuel tanks…..

I always remember watching the ‘King’s Cross Shuffle’ as locos moved from the station to the fuelling point and wondering why they persisted with such an awkward manoeuvre. That said, something similar still happens at Ipswich when locomotives make their way from the sidings to the fuelling point, where a shuffle is required to get on to the Freightliner facility.

A Deltic would always cover the whole station with its trademark blue smoke, especially when starting up from being idle for a while. I do miss that smell…. I seem to recall a Summer Saturday at King’s Cross when there seemed to be a constant movement of locos in and out of the facility. It must have caused the Operational and Signalling departments a few headaches if ever a problem arose!

I’ve always thought that this facility would make a great modelling project, and having seen a 4mm model of Ranelagh Bridge at Paddington (set at night too) the temptation seems even greater!

I’ll put up a couple of the other photos taken on the same evening in future posts, but please look at a previous post of two Class 40s at the other end of the facility.