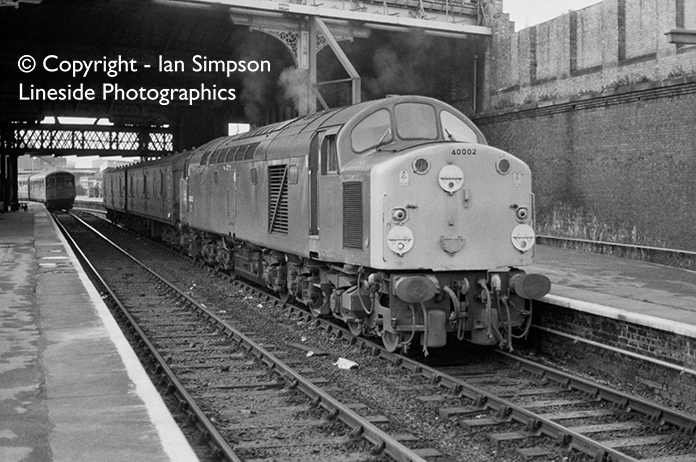 Class 40 40002 sits at Platform 16 at Manchester Victoria station with two parcels vans some time in the early 1980s. I’m unsure of the working, but its likely that the train is about to leave for Red Bank Carriage Sidings just to the east of the station.

I am currently writing an article for my new magazine on parcels trains in the Manchester and Stockport area in the early 1980s. I have several photographs of short parcels (ECS to Red Bank Sidings or otherwise) at Platform 16 at Manchester Victoria station (as above); I believe that it may be an NPCSS ECS move from Bangor to Red Bank, but cannot confirm it. (I am going through the WTTs I have access to, but if anybody is aware of the workings at this time please contact me.)

I have no details of when the photo of 40002 was taken, although I think it is at least 1982, as the No.1 end was rebuilt and had the number applied some time in the early 1980s. Again, if you can shed any light on the likely date of the photo then please get in touch through the comment box below.

Manchester’s main parcels depot was that at Mayfield station, but both Piccadilly and Victoria station saw their fair share of parcels and news trains. Newspapers were printed in Manchester up until the mid-to-late 1980s, so as well as handling editions sent up from London, the railways were also used to send papers around the north of Britain. Famous amongst railway enthusiasts were trains known as the Red Bank Empties which were made up of empty vans returning to Red Bank Carriage Sidings ready for them to be used to distribute newspapers the following night  from Manchester.

Red Bank Sidings were also used to store coaching stock in between workings to avoid congestion at Victoria station; so passenger stock, parcels, news and DMUs were all managed through the facility up until the late 1980s when many services were switched to run through Piccadilly station rather than Victoria.

Look out for some forthcoming collections at Lineside Photographics showing parcels workings in and around Manchester.