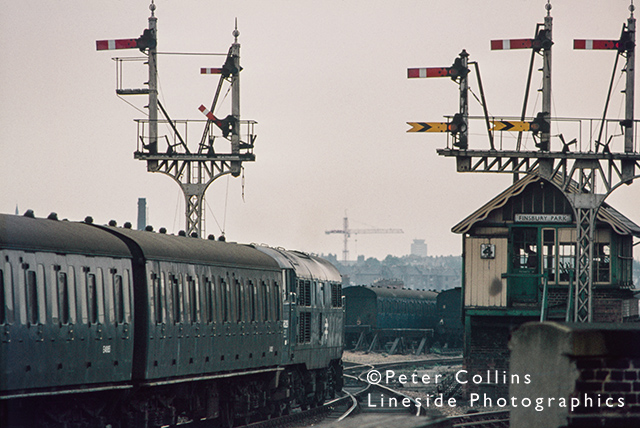 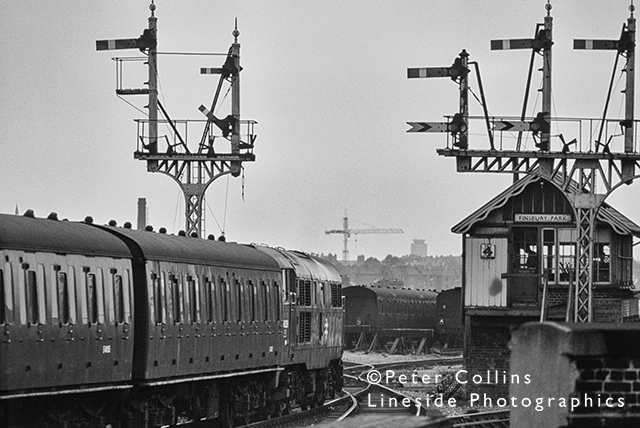 The same image of 5639 as above, but now converted to Black and White. No colour tint, but has it lost something by removing the colour?

Colour Cast, remove or convert to Black and White?

The image of Class 31 5639 entering Finsbury Park station is typical of colour slides taken in the late 1960s and early 1970s. The colour cast, typically blue on Agfa slides, is more prevalent on photographs taken in poor light (as here), rather than in full sun.

The dilemma is, should we keep the colour and address the colour cast as best we can, or take the easy option and convert the image to black and white. The record of the event remains the same, but we don’t get an idea of the colour of the railway stock, the signalling infrastructure or the landscape.

When looking at photographs we try and reflect more than just a record of an event whenever possible. Peter Collins ensured that he not only took a photograph of the loco-hauled suburban stock, but that he also showed the signalling infrastructure too. The loco-hauled trains were soon to be taken over by DMUs, and then electric multiple units. Electrification of the Great Northern suburbs was not too far away either.

The image captures British Railways when it was in the transition period between steam and rationalisation on a major scale. The fact that the stock will sit in carriage sidings until the evening peak is a throw back to the nationalised railways, and yet the flexibility it gave is sorely missed today!

So, the question remains, does the image being in colour matter?