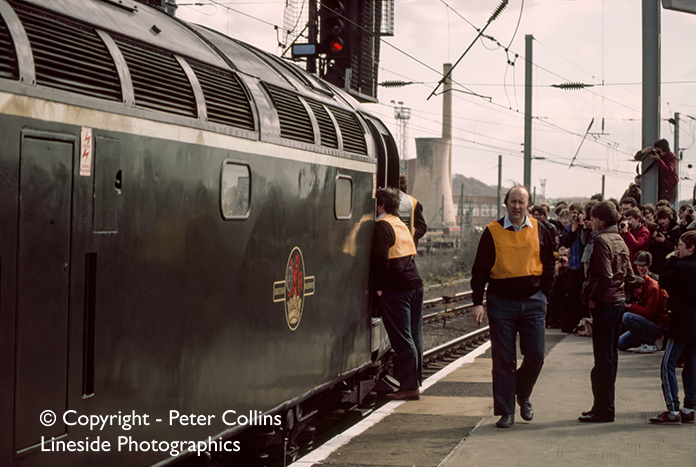 EE Class 40 pioneer 40122 (painted as D200) sits at Warrington Bank Quay station (I think) with a railtour. Those are the only details I have for this photograph so I am hoping that somebody recognises themselves or was involved with the tour so that I can get some more details!

The fervour and adulation surrounding the withdrawal of the Class 40s seemed to surpass the EE Class 55 Deltic locomotives at times, and as this photograph shows the Whistler fans spanned the age groups. As the numbers of locomotives dwindled so the fans grew in numbers, and as the class seemed to be concentrated on services in and around the north-west  of England, memories of 1968 (and all that) must have been re-kindled!

If you can help with any information on the railtour, date and confirmation of location then I would appreciate it.

There will be many more photographs of Class 40s available to purchase at Lineside Photographics in the coming months. The Class 40 Preservation Society (CFPS)  owns and runs three Class 40s (40106, 40135 and 40145).