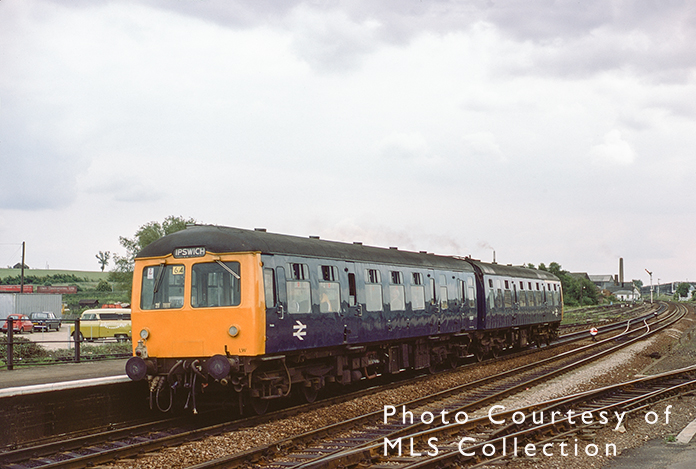 A Class 105 DMU (also known as Bog-Crates) departs from Stowmarket towards Ipswich on the 29th June 1978.

I started trainspotting in East Anglia in 1976; a hobby that started with the purchase of an Ian Allan Combined Volume after seeing Deltic 55006 ‘Fife and Forfar Yeomanry’ on a King’s Cross to Edinburgh express at a Northumberland Level Crossing. My normal spotting, however, was of ‘Bog-Crates’ in sleepy Suffolk.

Living only 200 yards away from the Cambridge/Ely to Ipswich railway line I had a good starting point for ‘cops’! My local station, Thurston, had been a manned station until January 1967, and until 1976 still had a coal train tripped from Bury St. Edmunds by the station pilot (normally a Class 08 shunter). Having a goods yard, Thurston also had a signal-box, which controlled the local semaphore signals.

The Ipswich-Cambridge trains were operated by Class 101 or Class 105 DMUs, although a notable exception was a train which started at Liverpool Street at 4am and made its way back to London via Ipswich and Cambridge. The DMUs were affectionately called ‘Bog-Crates’, a name I used but to this day I have no idea where it came from; other than the fact that the units were showing their age and had a toilet!

The picture above was taken by an Oldham photographer who visited East Anglia in the mid-late 1970s. The slide it is from has the processing date as July 1978, but no details of the date or service. In the deepest recesses of my memory I remembered that the at this time DMUs often displayed the day and date in the window of the unit, and this photo shows 29 and ‘Thurs’. Sure enough, the 29th June 1978 was indeed a Thursday, so I had the date of when the photo was taken.

All the photo shows is that the destination is Ipswich, but it is also displaying a ’64’ in the window; so is this the route, or something else? Can anybody answer this question? For a little help another photo shows the same ’64’ and a destination of Leicester, also on a Class 105 DMU, but not the same one.

If anybody can help then please drop me a line below.