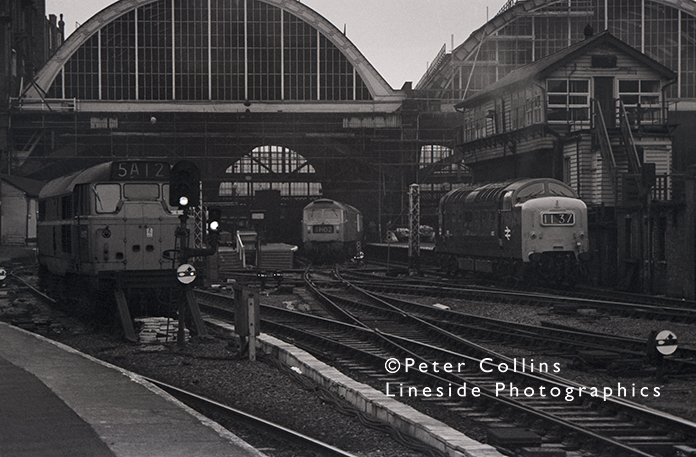 A view from York Road station of the eastern platforms of King’s Cross station in the 1970s.

A view of the eastern platforms of King’s Cross from York Road station. This platform served the trains from the Hertfordshire suburbs to Moorgate until closure in 1976; the northbound suburban services used Platform 16 on the far West of the station.

The famous station signal-box can be seen on the right hand side of the photograph and in front Deltic 9007 ‘Pinza’ waits patiently for the stock of 1L37 19.00 King’s Cross to Bradford service to arrive at the station. An un-identified Class 47 departs with the 18.25 1H17 to Hull. the 1H02 head-code fooled me at first as this is the 12.20 service to Hull, but I am assuming that the loco had worked this service earlier in the day then made its way back to King’s Cross in the late afternoon. The Class 31 (still in BR Green, and possibly 5572) is probably the station pilot used on ECS movements to the carriage sidings north of the station. It is not hard to imagine the Class 31 replaced with an N7, the 47 with an A3 and the Deltic with an A4!

The signal-box was built by the LNER in 1932, and closed on 26th September 1971, with all signalling operations moving overnight to the new King’s Cross Power Signal Box situated on the site of the old York Road Station buildings (behind the photographer). The signal-box remained in-situ for another five years before being demolished as part of the electrification scheme and rationalisation of the station track-work.

The negative from which the photo was scanned is in a bit of a state, and needed a lot of work doing to it to make it presentable. It’s a little dark for my liking, so a bit more work needed I think before I’m happy to make it available to buy at Lineside Photographics.